Take a venture to the South where a distinctly different American culture will lure you in. Deserts and canyons will pleasure your eyes while cowboys and jazz bars will liven your nights. Kicking off in New Orleans and ending in Los Angeles, with highlights like Memphis, the Grand Canyon & Texas in between.

Day 1: Arrive New Orleans
Welcome to the first day of what might just be the best 14 days of your life. It's time to fully immerse yourself in New Orleans with a whole day to yourself. Start out at Cafe Du Monde for a tasty beignet, and pick up some treasures at the French Market. This diverse city has so much going on; visit the Garden District, spend a few hours in the soul kitchens and jazz clubs of the French Quarter or even hang out in Jackson Square with the musicians, artists and fortunetellers. There's a cooking school on offer for those keen to whip up some Gumbo, jambalaya and creole recipes. Back in the city, the Mardi Gras Museum could be on the cards, and may even convince you to come back another time to experience the real thing first hand.

Day 2: New Orleans to Memphis via Jackson
You've let the good times roll (or “Laissez Les Bon Temps Rouler”, as the motto goes). It's time to gather your party beads and empty your hurricane cups, because we're veering north today.If Jackson was cool enough for Johnny Cash to sing about, then it's sure as hell cool enough for us. We'll drop in to see if we can pick up on some of that Delta blues inspiration before continuing on to Memphis.It's no wonder Memphis, Tennessee, pulls so many pilgrims - not only is it the home of blues, it's also the home of barbecued meat. Now that's a winning combo. Lose yourself to dance on a group night out on Beale Street, where Blues music was first birthed among its juke joints and honky tonks.

Day 3: Memphis
Today we pay homage to Elvis, the late and great King of Rock’n’Roll. We'll visit and tour his former home, Graceland, where you will get up close and personal with his fabulously flamboyant jumpsuits and many gold records. The afternoon is then yours to do with Memphis what you will - we recommend a visit to the Sun Studios where many of the greats have recorded albums over the years.

Day 4: Memphis to Dallas via Little Rock and Taxarkana
Make like a band and get the show back on the road. Today we'll cross the Mississippi River and head through the Deep South, arriving in the Lone Star state by nightfall.We'll make a stop here to look around Little Rock Central High School, one of the founding places of 'desegregation' which brought black civil rights issues into peoples lounge rooms at a time when much of the world had no idea what was going down in America's South.You may be looking at this name thinking what the...and you would be right. After a quick photo op at the border of Texas and Arkansas (aptly named Texarkana) and some lunch, it's back on the road to our next stop.We arrive in Fort Worth (think western style with modern vibes),ready to take on anything and everything Texan. Tummies will be rumbling, so we'll dive mouth first into an over-indulgent big BBQ feast of ribs, sausages, chicken and more - not for the faint-hearted (veggies don't worry, you won't be going hungry). A night out with the locals will get you in the Texan spirit, before falling into a blissful sleep which will probably having you dreaming of BBQ.

Day 5: Dallas/Fort Worth
Dallas is home to Oil Tycoons, rich ranchers, a thriving tech industry, and of course the Dallas Cowboys, also known as ''America's Team''.Feeling like an investigation? We include a visit to the 6th floor museum where you can learn more about the assassination of President John F Kennedy and try your hand at figuring out 'whodunnit.' Back in Fort Worth, enjoy lunch and sightseeing around Sundance Square, try a craft beer on the Ale Trail or pick up some genuine leather boots and hats at the world famous Justin's Boots. You will be looking good tonight as we head to the Fort Worth Stockyards, home of the cowboy hall of fame and the world's largest honkey tonk, Billy Bob.

Day 6: Dallas to Amarillo
Today we cast the Dallas Cowboys and their cheerleading companions aside and make for the real cowboys of the Texas Panhandle.Heading west we travel into the heart of cowboy country - yes this really is the way to Amarillo. This town may be little but it sure is mighty when it comes to country living. The old west accommodation even has a Texas shaped pool and a hotel for your horse, if you thought to bring it along. Tonight over dinner, you could try your hat at 'The Big Texan Steak Challenge' - a true Man Vs Food moment for those who have more metabolism than sense.

Day 7: Amarillo to Albuquerque via Santa Fe
Leave the dusty plains of Texas behind in the rearview mirror, because we're en route to the mountains of New Mexico. We'll make a stop on the way out of town where it is strictly Americana with a Cadillac ranch full of unique art and a timeline of Cadillac models. Grab a can of spray paint and leave your mark on a Cadillac buried in the sand.As we pull into New Mexico's largest city sometime in the late afternoon, you'll instantly be hit with the Spanish vibes. Adobe buildings hundreds of years old line Old Town, and hip Nob Hill is peppered with shops, bars and restaurants.

Day 8: Albuquerque to Durango
The only way to start your day in Alberquerque is bobbing through the sky in a hot-air balloon, getting snap-happy with the fiery desert vistas below. Quite literally, #nofilterneeded. That being said, a sleep in might be nice too - either way, we'll be on the road to Durango by late morning.The great outdoors is the way of life in Durango with adrenaline pumping river rafting on offer to you and your fellow thrill seekers. If you’d rather explore the region on horseback then pick your trusty steed and be on your way in true old school traveller style. Durango literally means "water town", and considering the number of microbreweries it has, we might just ditch the water for something a bit stronger.

Day 9: Durango to Grand Canyon via Monument Valley
This morning we'll leave the Rocky Mountains behind with one of the Seven Wonders of the Natural World in our sights.Nothing can prepare you for the impact of the Grand Canyon - it's a legit 'you had to be there' moment. We'll pull in late today, have a moreish group dinner and check into our lodge to get a good night's sleep before getting up close and personal with the canyon in the morning.

Day 10: Grand Canyon National Park
You will be contemplating life, existence, and the immense size of the Grand Canyon with a free day to spend in Grand Canyon National Park. You can spend your day feeling a part of the wilderness as you go hiking through the exposed rock,but by far the most spine tingling experience at this natural wonder is one of our optional chopper rides through the UNESCO World Heritage site. Indulgent sure, but one of those life moments you deserve to treat yourself to. Tonight settle in to watch the sunset on the rim - the epitome of a #NOREGRETS moment for you and the squad.

Day 11: Grand Canyon to Las Vegas via Route 66
Immersing yourself in the purity of nature has been magical, but something a little more tainted is calling your name - that's right, we're Vegas bound baby!Following the legendary Route 66, we stop off for a souvenir hunt in the old historical town of Seligman. You’ll be transported back to the 1940s while you stroll past the original facades of shops and motels.Viva Las Vegas! And you certainly will live the life of Las Vegas on this extended stop in the place so aptly dubbed ‘Sin City’. A nighttime tour of the famous ‘Strip’, including a stop for pics at the legendary Vegas sign will show you the after dark offerings of this absolutely outrageous city. Freemont Street is on tonight's agenda, where the main attraction is a super impressive light and laser show, then it's all about hitting the town, Vegas style.

Day 12: Las Vegas
You have today all to yourself but you’ll need to run to a tight schedule to fit in all of Vegas' weird and wonderful charms. Travel the world in a day, taking in the famous Bellagio fountain, a Venetian gondola and even an Egyptian pyramid, all whilst staying firmly within the city. Feeling romantic? Stop by and see one of the many Elvis impersonators for a shotgun wedding ceremony, and maybe even get hitched yourself...(joking). Tonight live like a baller while you cruise along the 'Strip' in a party bus and don't stress, the bill is on us. Later, you’ll witness the 24-hour party scene first hand when you head out for a night with the crew.

Day 13: Las Vegas to Los Angeles via Mojave Desert
We are on the home stretch peeps. We’re leaving Las Vegas on a journey through the vast and dusty Mojave Desert and back into unmistakable scenery of Southern California.Can it be true - is it really over? We'll finish of this truly slife changing trip by book ending it back in Los Angeles where it’s time to say goodbye to you're new best friends (who won't be feeling so new by this point). Many a teary hug will be had with the people you have made unforgettable memories with. What a truly once in a lifetime opportunity for adventure, and we hope you leave with a brand new perspective on travel.

Platinum Travel and Contiki 18 to 35 Holidays

Platinum Travel are delighted to be working with Contiki Holidays. Contiki specialise in group travel holidays for the 18 to 35's and have being doing so for over 50 years. You get to share your passion for adventure, good times and creating memories with a group of 18-35 year old's from around the world.

There are over 270 trips around the world, with plenty of departure dates to choose from to create a holiday that’s perfect for you, from budget to accommodation style.

Contiki are about you exploring the world with like-minded people, which is why they only run trips for 18-35 year olds. You can expect to join a group of 18-35 awesome people from all around the world on our Europe, Australia, North America and New Zealand trips, and in Asia and Latin America it's all about small group adventures with up to 25 travellers. Don't worry if you are travelling alone, half of our travellers set off alone, meaning you'll have plenty of opportunities to make new friends.

The trips include everything you need to have the best travel experience of your life. Contiki take care of all the logistics like booking hotels, finding the best places for dinner and getting you from place to another. The Tour Managers, Drivers and Local Guides know as much about the destinations you visit as the locals themselves.

You'll get VIP access to the world's icons, as you skip to the front of the mile-long line at the Eiffel Tower and Colosseum. One thing's for sure – it's amazing value you won't find anywhere else.

The 5 Top Reasons to travel with Platinum Travel and Contiki 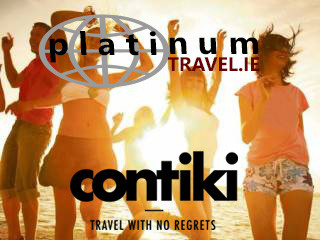